Vulcanization is the process for transforming natural rubber into a cured, more durable rubber. It will become less sticky and since the rubber normally melts slightly in the controlled vulcanization process, making it bond with surrounding materials. This replaces cement (glue) to a large extent. This is a great feature for footwear which has been used for long time. Vulcanization is mainly used sneaker production but a big variety of shoes can be produced with this technique.

Rubber can be vulcanized in many ways, using different chemicals, normally a sulfur mix, or by a combination of heat and chemicals. This curing process transforms the rubber from being easy to break, soft and gummy to a durable yet flexible material suitable for demanding conditions such as footwear or car tires.

In the footwear industry the most common way to vulcanize is by heat and chemicals. The rubber need to reach a temperature of 170 degrees to vulcanize properly. This temperature creates limitations in what kind of materials should be considered for a vulcanized shoe. Polymer based fabrics such as polyester, poly-amide or plastic eyelets etc pose big risk of melting in the process. However, there are also heat resistant polymer based materials suitable for vulcanization.

Due to the temperature the lasts used for vulcanized production is made out of aluminium to sustain the heat but also to spread it evenly throughout the product.

The lasting method is normally board lasting where the upper is assembled in the same way as for a cementing construction but dressed around an aluminium last.

The bottom outsole is either calendar or molded and then a foxing tape is wrapped around the connection of the outsole and the upper to hide the gap. Calendar soles are made by running a continuous sheet of uncured rubber through a dual-roller press. The top roller is etched with a tread pattern while the bottom roller is smooth. Once pressed, the soles are cut to shape by either a cutting die or by hand. The uncured soles are then applied to the upper boot and vulcanized together to form a seamless permanent chemical & physical bond.

After the foxing tape is added the shoe is trimmed and cleaned, removing any dirt from previous processes and making sure that the shoe is clean.

The foxing is a rectangular string of rubber used to increase bonding between upper and outsole. Sometimes referred to as “outsole wall” due to the characteristic where it´s

Depending on design it can have different shapes and thickness but will always be in the form of a tape. The shape is acquired by pressing rubber through a mold, different colors can be achieved by multiple material sources, each with a different color. The foxing is processed as an endless tape and then cut into desired length for later attachment.

The last step is the actual vulcanization which can be done by different methods. The most commonly used is autoclave. A pressurized oven normally operating at 120-180 degrees Celsius and at 140-350kPa. At 170c the vulcanization starts after approximate 10 minutes

Vulcanization ovens, also known as autoclave, for footwear and a tray of sneakers to be vulcanized.
Full process of vulcanized board lasted sneakers cured in autoclave.

Finalized vulcanized shoe. In this case a Jack Purcell style from Converse in canvas.

Normally the term vulcanized within the footwear industry refers to the autoclave method. There are however other ways to cure rubber and technically also outputs vulcanized shoes. It can be both prepared. 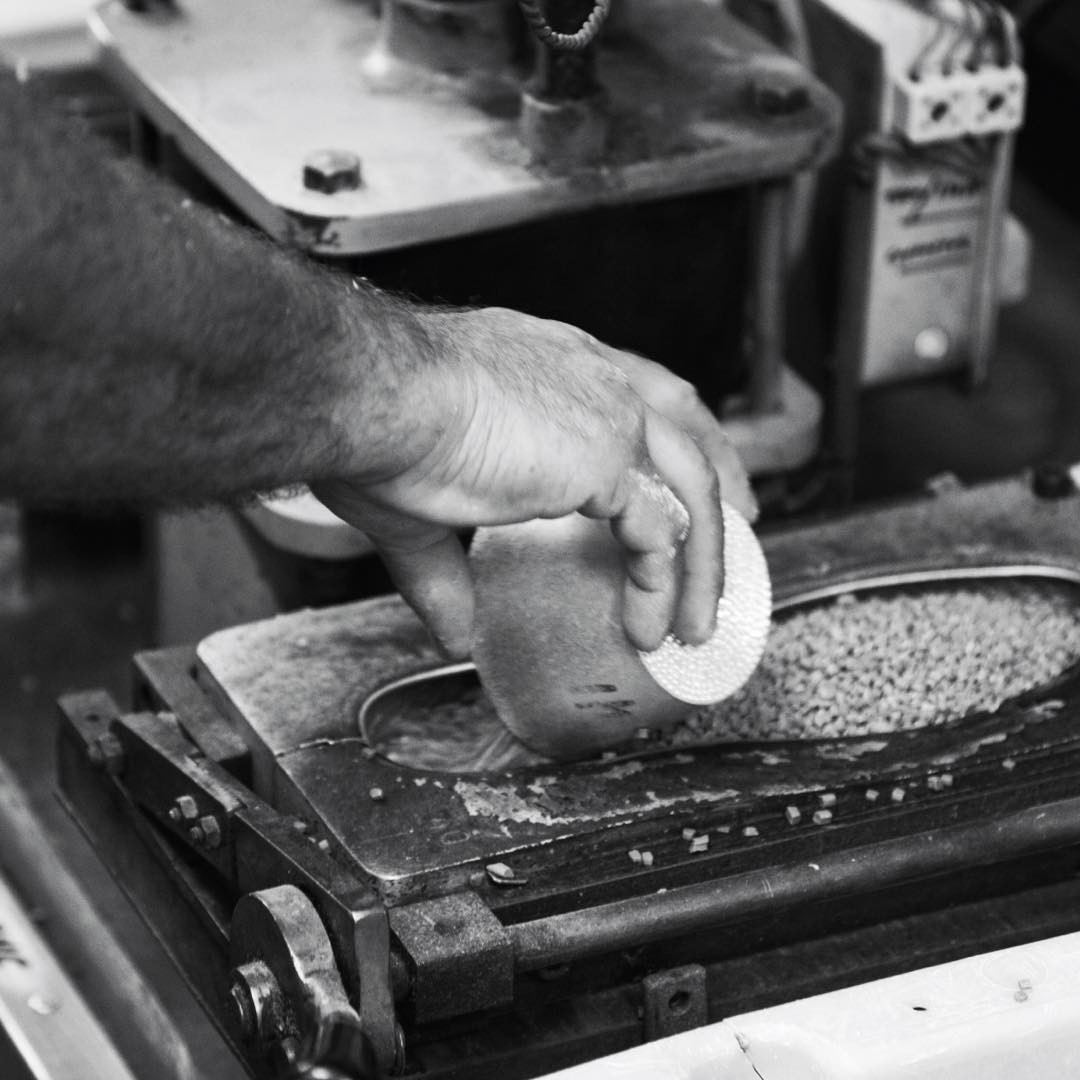 A traditional method of vulcanization often used in Spain.

There are also other processes of using a vulcanization process to create footwear. One is a traditional method commonly used in Spain. Uncured rubber granulates are put into a heated mold (picture). The upper is prepared and lasted, then put with pressure into the mold. Together with the melting of the rubber it´s creating the outsole shape from the outsole mold.

There are proofs of rubber beeing vulcanized as early as 1600bc by the Mesopotamians. On the other side of the world there are also traces of rubber beeing an important part of life. In what today is known as Mexico a vilization called Olmec in Nahuatl (Aztec language) flourished from 1400bc. Olmec is directly translating to “rubber people”. 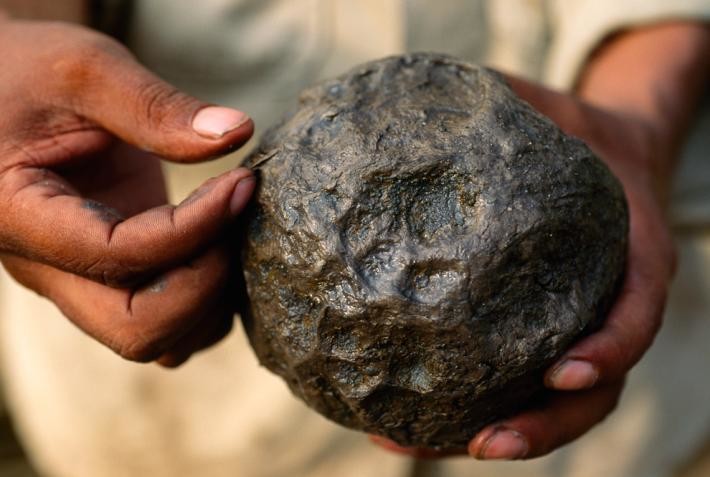 A latex ball made by the Olmecs in what is now Mexico.

1832 a man called Nathaniel Manley Hayward was working at a rubber facoty in Roxbury, Connecticut, US where he made an accidental discovery. He found out that rubber lost all is viscosity when in contact with sulfur. He shared his discovery with Charles Goodyear (not related to goodyear welting) but the first one to patent the process of vulcanization of rubber was Thomas Hancoock in May, 1845 in Britain. Three weeks later June, 1845 Charles Goodyear was awarded a patent in the United States. He later wrote in his autobiography Gum-Elastica:

“... The inventor made experiments to ascertain the effect of heat on the same compound that had decomposed in the mail-bags and other articles. He was surprised to find that the specimen, being carelessly brought into contact with a hot stove, charred like leather.”

“He directly inferred that if the process of charring could be stopped at the right point, it might divest the gum of its native adhesiveness throughout, which would make it better than the native gum. Upon further trial with heat, he was further convinced of the correctness of this inference, by finding that the India rubber could not be melted in boiling sulfur at any heat, but always charred. He made another trial of heating a similar fabric before an open fire. The same effect, that of charring the gum, followed. There were further indications of success in producing the desired result, as upon the edge of the charred portion appeared a line or border, that was not charred, but perfectly cured.”

For vulcanized footwear saw daylight in 1892 when the brand Colchester Rubber Co. created the first “Basketball sneakers”. The brand was created by Colchester Rubber Company which was located in the same building which previously had belonged to Hayward 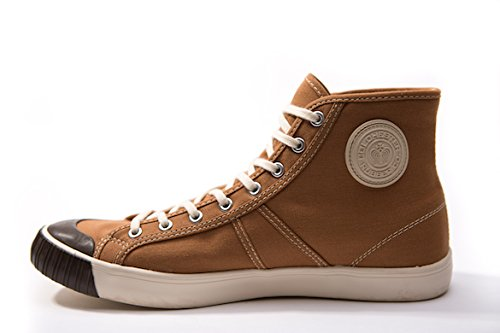 Colchester Rubber Co. is the predecessor of the brand Keds which was founded 1916 and continued the tradition of making vulcanized shoes.

In the beginning of the 20th century other brands started to pop up such as Converse, founded 1908.