Open shoe with a close link to ballet shoes. Usually a simple design with exposed foot and think heel or without a heel. Sometimes with a ribbon on the front. 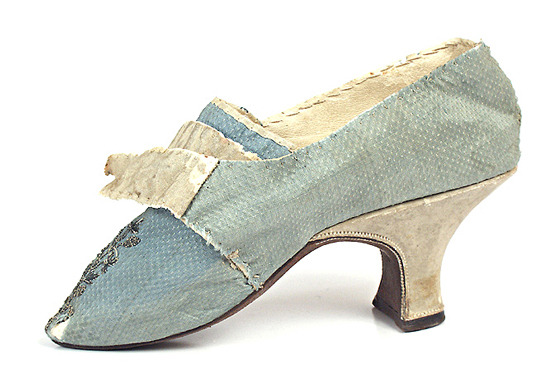 In the 16th century, both men and women wore heeled shoe called pompes. This was also what the ballerinas used during dance performances. During the later half of the 17th century, the ballerinas started wearing a version of the pointe instead (right picture). Some credit this change to the beheading of Marie Antoinette who was strongly associated with heels where the public wanted to make a clear statement against everything she represented.

It´s not confirmed but 18th century ballet dancer Marie-Anne de Cupis de Camargo is credited for being the first dancer to remove the heeled shoes and dancing in slippers. She opted for a non-heel alternative since it allowed her more free motions and flexible positions.

1795 the squared toe box was invented with the working name “flying machine” by Charles Didelot. This allowed dancers new positions, dancing on the top of their toes. During this time the shoes were fastened by multiple straps tied along the ankles and calves to stay in place.

1832 the ballet Sylphide was performed by Marie Taglioni wearing pointe flats during the full ballet. Something which had not been done before.

In the 1880s a shoemaker named Salvatore Capezio started working in the United states repairing shoes for performing artists including pointe shoes for ballerina dancers. He made so many repairs for the pointe shoes he decided to improve upon it and create his own version. Somewhere around this time, the pointes were also improved by redesigning the “flying machine” technique by reinforcing the toe box with layers of fabric allowing for better durability and grip.

In 1910 the famous Russian ballet dancer Anna Pavlova commissioned Capezio to make pointe shoes for her whole crew when visiting New york. This is the birth of the modern pointe shoe since Pavlova had a few special needs. Her instep and arches were high which created a need for stable shoes. She also has slender and tapered feet which created big pressure on her big toes when dancing on pointe. So, she needed her pointes to compensate for this. By inserting a thicker leather sole and a hardened and reinforced toe box she took care of this and Capezio created the pointes accordingly. This made Capezio later on a famed name in the industry adding to the interest in dancing shoes in general.

Compared to current pointe shoes the satin versions were very soft. Today they are reinforced and stiffened by starching glue on the satin and stabilized with a leather outsole.

The process to create the modern ballet flat we see today in non-dance-environments was started by French shoemaker Rose Repetto in 1947. She then created a pair of pointes in her workshop for her son Roland Petit. Roland was an up and coming ballet dancer who put the name Repetto on the map of dance shoes.

The big breakthrough came in 1957 when Brigitte Bardot, a soon to be world-famous dancer/actress, commissioned Repetto to create an everyday comfortable enough shoe based on the ballet flat. The red “Cendrillon” ballerina was created which Bardot wore in the movie “And God Created Woman”. The Cendrillion was an instant hit. 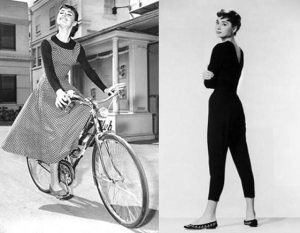 The fame was followed up with actress Audrey Hepburn wearing a pair of ballet flats in the movie “Funny Face”. This made the ballerina reach a new level and has since become a staple product.

The ballerina category is not defined by a specific material. It can be made in leather, synthetic or textile.

Different types of ballerina shoes explained and what differentiates them.