Formal lace up shoe with open llacing, opposite of Oxford Shoes. The facing is constituted of the two quararters attached to the vamp giving it´s characteristical look.

There are many theories behind the origin of the Derby Shoe. There are some sources which claim that the Derby shoe is an evolution of the oxford shoe. The oxfords characteristicla closed lacing system is creating a comfort issue for people with high instep. In order to have a more flexible instep tolerance the attachment of the facing was moved from underneath the vamp to instead be placed outside the vamp.

Another theory related to Edward Smith-Stanley (1799-1869), the 14th Earl of Derby. He was a man of proportion and his feet did not fit comfortably in the boots common for that time. In reponse to this his bootmaker developed an open laced system to better accomodate his needs.

The term derby cut was first mentioned in Dunkley’s account book (what is Dunkely?) 1862, then it was used to refer to a side sprung boot, not a shoe. In 1872, St. Crispin’s Magazine described: ” a new tie shoe better than the Oxonian as the seam is not near the tender part of the foot.” This is the first known reference to the derby shoe as we know it.

The third theory also orignates from boots but with a different angle. During the 1800s the standard soldier footwear was closed lacing system boots. These boots were not very comfortable and was relatively troublesome to take on and off. During the Napoleonic wars a Prussian army officer named Gebhard Leberecht von Blücher, Fürst von Wahlsett, changed this. His ambition was to create a boot that was comfortable for all foot types and easy to remove and put back on. He desgined a boot with two leather flaps facings that was attached to the vamp but did not meet each other at the bottom. This resulted in a wider opening meeting his requirements.

This made the shoes more comfortable since it was possible not only to adjust the width at the top of the shoe but also at the bottom of the facings. These boots were named Blüchers.

The term Blücher and Derby is often used interchangeably but there is a differenc ein construction. Both share the three features of a Derby, the difference is in the construction of the facing.

The derby category is not defined by a specific material.It can be made in leather, synthetic or textile.

The derby shoe has a variety of name depending on location and preference.

Different types of derby shoes explained and what differentiates them. 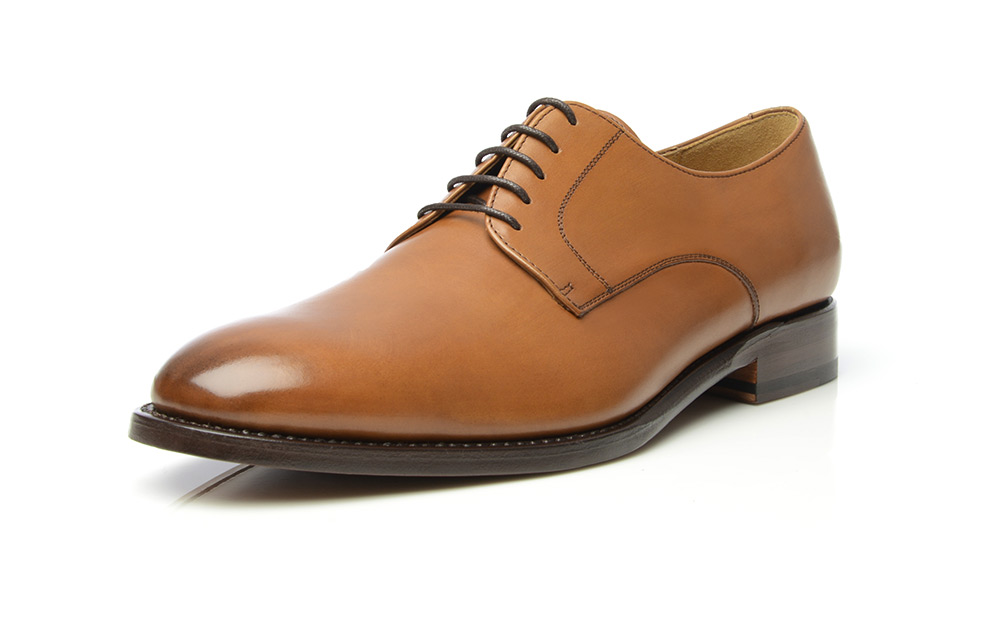 Usually consisting of three pieces: Two quarters sewn to the vamp with tongue. No ornaments such as brogue or cap toe. Sometimes a cap on heel is attached. Style is still considered to be a plain derby. 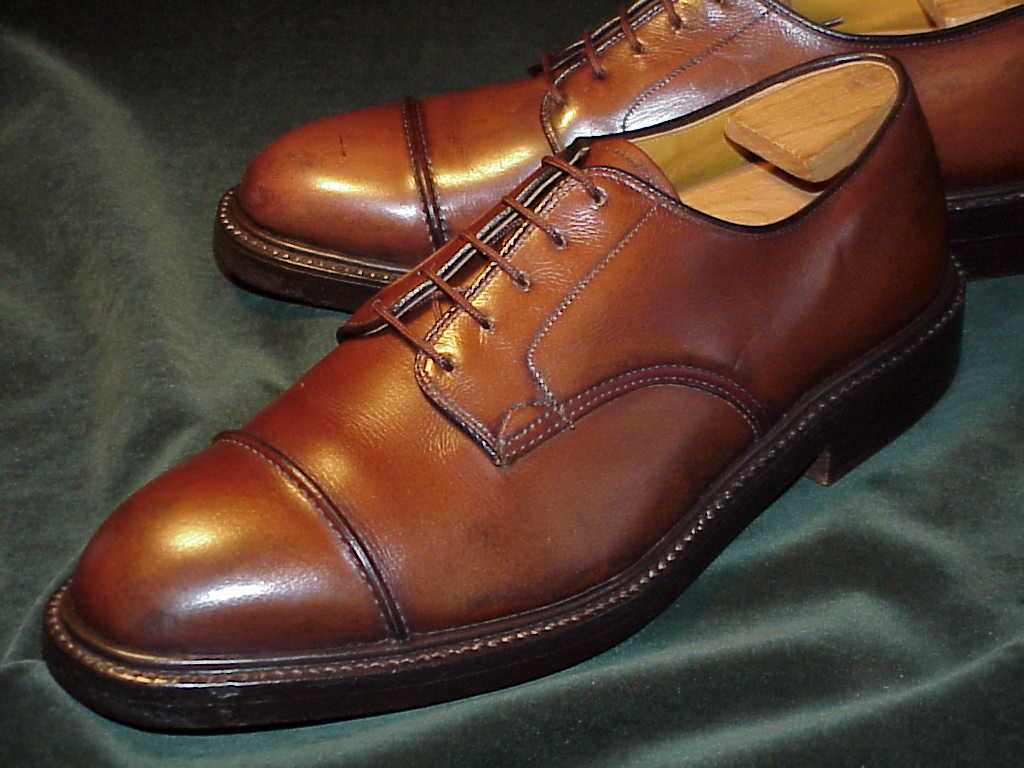 Similar to the plain derby but with a cap over the toe box. Can have decorative broguing along the stich line. 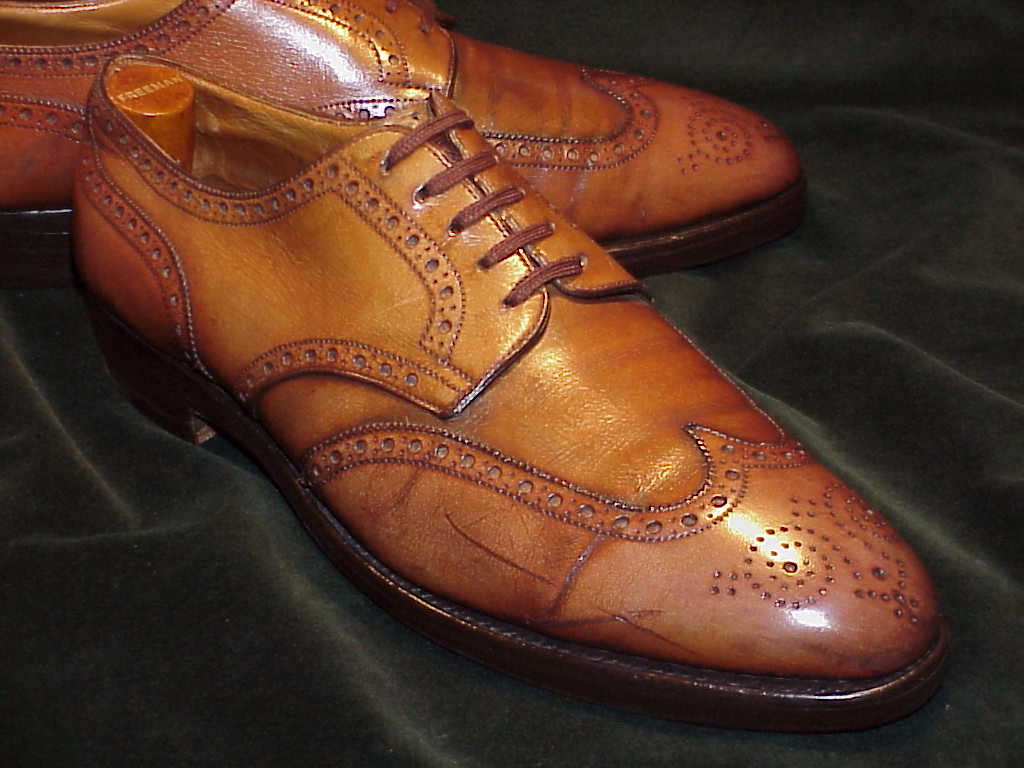 Classified by the shape of the toe cap which resembles to a W. The cap usually extends along both quarters of the shoe. Usually found as brougued versions. 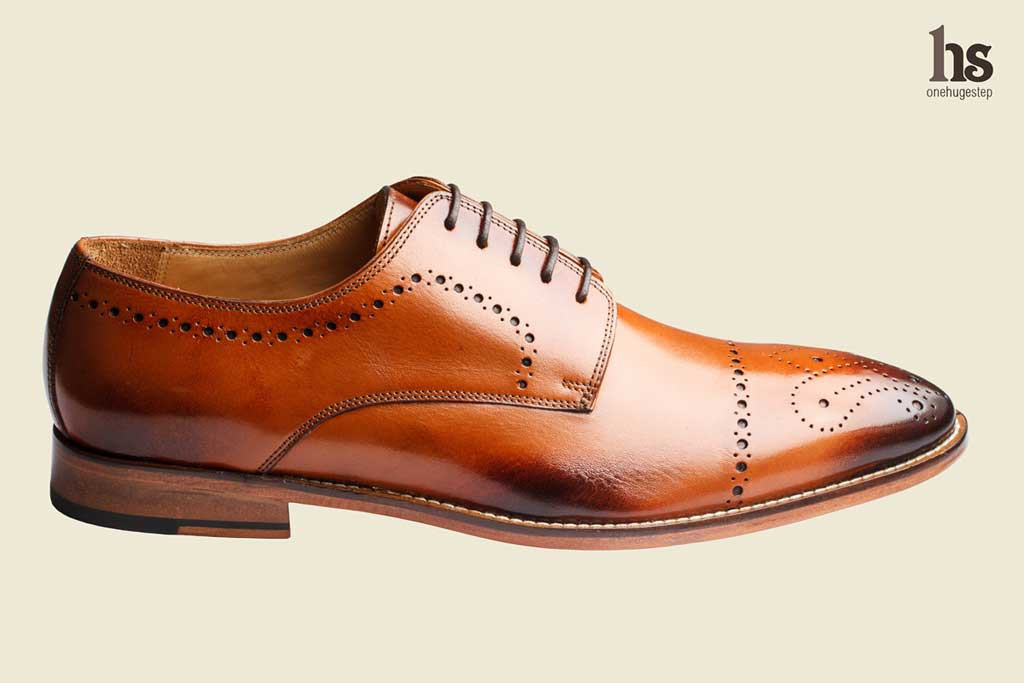 This is not really a type in itself but usually an attribute to embellish any kind of derby. You can see this on all appearances except the plain oxford. 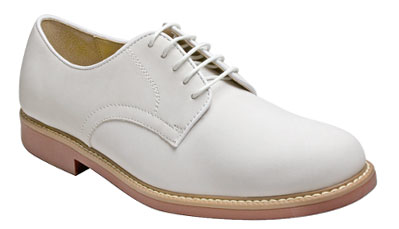 Originally identified by the white buckskin. However today commonly found using cow suede instead of buck. Traditionally made in derby versions. 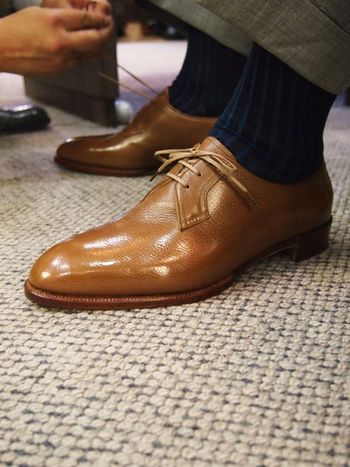 Sometimes refered to as Wholecut Derby however it´s a Blücher by definition.

Apart from the facings the shoe is cut from one piece of leather instead of multiple. It generally only has one seam at the heel and gives a very clean and elegant look. 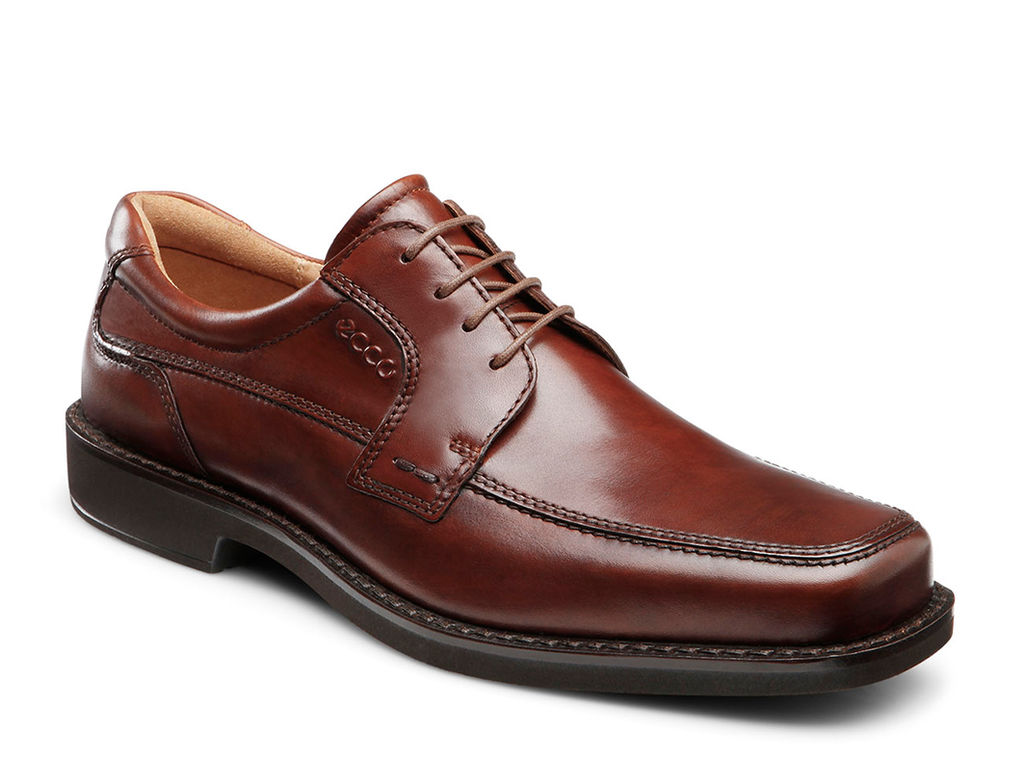 Characteristical seam along top of the vamp with a moccasin-like stich. Can be a real or fake moccasin stich

What is difference between apron and Cap toe?

The Derby was almost certainly developed from the Blutcher army boot and at one time was known as the Lorne after the husband of Princess Louise who married in 1871 or its French name the Moliere. The first mention of the name Derby as a style term for footwear is in Dunkley’s account book of 1862 where the term describes a pair of side sprung boots, not now our idea of a Derby. In St. Crispin’s Magazine of 1872 there is mentioned, “The Derby a new tie shoe better than the Oxonian as the seam is not near the tender part of the foot”.